To make a purchase please visit our sister site WholeSaleRoots;

Capadula is an ancient and popular Natural aphrodisiac with many physical benefits.

What is Capadula? Capadula is a plant thats found in South America that has been used by men in the area to prevent and cure Impotence, Premature-Ejaculation and to raise sexual Libido.. You get the same benefits from Capadula as you do from the famous blue pill but without any negative side effects.

Preparation (How to Use): Boiling the root and drinking on a regular basis will surly cure your dysfunction without the side effects. 14 cup of bark to 1 liter of water. Bring to a boil and drink as tea. You can add water and re-boil the bark 5-7 times or more until it gives out no more Color. It starts Dark Red and goes to light pink when you keep boiling it. After a few times it gets soft and you can use knife to strip it up and reveal the insides so keep extracting all the beneficial juices from the bark.

We usually add Cloves, Cinnamon (Spice Sticks) along with Bay Leaves to give it a good taste. 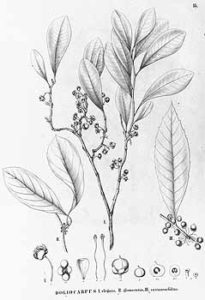 Leaf: Used to disinfect the umbilical cord of newborn babies in Guyana.

Sap of the stem: Used to relieve stricture or as a thirst quencher. Sap is also used as an abortive, for coughs and colds, and to treat snakebites.

Six species of Dilleniaceae were collected under the name kapadula: Davilla kunthii, Doliocarpus cf.
dentatus, Pinzona sp. TVA2509, Tetracera asperula, T. tigarea, and T. volubilis subsp. volubilis.
Little agreement existed among informants on local names and types. It thus seems that species are
confused and used similarly, without noticeable differences in their effect. T. volubilis subsp.
volubilis it is treated here, since it was by far the commonest ‘kapadula species’ in northwest Guyana.
Kapadula wood is the main ingredient in aphrodisiacs made with the following ingredients: locust
bark (Hymenaea courbaril), cockshun root (Smilax schomburgkiana), kufa root (Clusia spp.),
sarsparilla root (Dioscorea trichanthera), monkey ladder wood (Bauhinia spp.), granny backbone
wood (Curarea candicans), and devildoer wood (Strychnos spp.). The components are soaked in
alcohol to make a tonic or boiled in water for an hour. The ‘kapadula wine’ is added to milkshakes,
porridge, or other dishes. It is said to be ‘good for the nature’, strengthen the body and protect against
diseases. Amerindians often call these aphrodisiacs ‘pork-knocker medicine’ or ‘black man’s tea’,
implying that they are not familiar with them. Yet many of them know exactly how to prepare these
beverages. Coastlanders often ask Amerindians to collect the ingredients from the forest, as they
cannot identify the species themselves. Cooks in mining camps prepare the drinks for the labourers.
Amerindian pork-knockers admitted they tried out these drinks and told wild stories about the effects.
When a large piece of stem is cut and held upside down, clear water starts flowing from the wood,
which can be drunk when thirsty in the forest. Snakebite victims are advised to drink only kapadula
water, as rain or river water would worsen their condition. Bottles full of kapadula water are collected
for the patients until they recover.

The sap is also used to disinfect sore eyes, and drunk instead of normal water to relieve the symptoms
of diabetes. To collect kapadula water for a sick child, a young liana is cut and tied together so the
water cannot flow out. The vine is taken home and the water dripped in the child’s eyes. The sap is
also drunk as a remedy for cough and colds. Pregnant women are warned not to drink kapadula water,
since it can cause abortion. Even cutting the liana with a cutlass during pregnancy is believed to
provoke a miscarriage. The sap is sometimes deliberately drunk for this purpose.
In remote areas, where women deliver their babies at home instead of in a hospital, kapadula leaves
are used to disinfect the navel strings of new-borns. The leaves are parched on a metal pot or burned
in the fire and ground to powder with a bottle. After cutting the umbilical cord with a razorblade, the
grey ash is rubbed on the navel remnants. This treatment quickly dries the navel and causes the
remainder to drop off. A decoction of scraped kapadula bark is used daily as an antiseptic wash to
clean the navel. Apart from kapadula, the ashes of burnt widi leaves (Astrocaryum gynacanthum) or
shells of the krekete snail (Ampullaria sp.) may be rubbed on the navel for the same purpose. In areas
closer to hospitals, this custom has died out.

Notes: (1) The species is called ‘fire rope’, because its rough leaves scratch the skin of the passer-by; (2) This is
also reflected in the Warao name, as ‘ero’ signifies liana and ‘karara’ means razor grass.

To make a purchase please visit our sister site WholeSaleRoots;

There are no reviews yet.

Only logged in customers who have purchased this product may leave a review.